Astonishing news from the Duke public relations office: Group of 88 member—and later apologist—Cathy Davidson has been nominated to the 26-member the National Council of Humanities, which advises the NEH. The position requires Senate confirmation; I would hope that at least one senator would ask Davidson about her record in the lacrosse case—both her rush to judgment in spring 2006 and her willful dissembling about her actions in January 2007.

On April 6, 2006—based solely on information about the case supplied by the media and rogue prosecutor Mike Nifong—she and 87 colleagues signed the “Group of 88” statement. The guilt-presuming document publicly affirmed that something “happened” to (false) accuser Crystal Mangum.

The signatories also appeared to express indifference to any evidence that might contradict their race/class/gender-dominated vision, announcing that they would be “turning up the volume” regardless of “what the police say or the court decides.”

And, in perhaps the statement’s most stunning passage, Davidson and her colleagues publicly thanked campus protesters for two things: “for not waiting and for making yourselves heard.” At the time of the statement, the two highest-profile campus protests were a March 26, 2006 protest in front of the lacrosse captains’ house at which protesters carried banners proclaiming “CASTRATE” and a March 29, 2006 “Take Back the Night” event at which protesters blanketed the campus with a wanted poster containing the lacrosse players’ photos.

Neither Davidson nor any other Group member ever explained why they thanked the protesters “for not waiting.” Many months later, Davidson and a few other Duke faculty bizarrely claimed that when they thanked protesters “for making yourselves heard” they were referring not to the two highest-profile anti-lacrosse protests but to other anti-lacrosse protests occurring on campus at the time. No contemporaneous evidence exists to sustain this claim.

As the months passed, the sexual assault case to which Davidson and her like-minded colleagues collapsed. And as it did, the Group came under increasing criticism from the media, from Duke alumni, and from some Duke students.

In response, Davidson took to the pages of the Raleigh News & Observer on January 5, 2007, to offer an apologia for the Group’s actions. As she conceded in a mass e-mail, she wrote the column after consulting with an attorney and being informed that she and her colleagues could be vulnerable to a lawsuit from the lacrosse players.

Rather than apologizing for her rush to judgment, Davidson’s essay combined self-pitying passages regarding criticism of her and other Duke faculty from “blog hooligans” with continued character assaults on the “sleazy” lacrosse players and a ringing defense of Crystal Mangum. Davidson chastised those who labeled Mangum a liar (as, by this point, had been clearly established), and instead mused, “Who is that exotic dancer? A single mother who takes off her clothes for hire partly to pay for tuition at a distinguished historically black college. Of course the lacrosse story makes Americans of conscience cringe.”

Perhaps most troubling for the qualifications of her soon-to-be position, however, was Davidson’s description of spring 2006 events on campus. Her January 2007 claims demonstrated a tendency for either outright fabrication or existence in a cocooned world in which no alternative narratives ever penetrated. Neither characteristic would serve the NEH well.

Davidson unconvincingly denied that the Group’s statement—which affirmed that something happened to Mangum and thanked protesters who had labeled the lacrosse players rapists—presumed guilt. She then invented an alternative reality in which the statement provided a needed corrective to a late March 2006 media environment in which black Duke students were being attacked by racist “insults” from fellow Duke students and in which most on campus and in the media were defending the lacrosse players, elevating them “to the status of martyrs, innocent victims of reverse racism.”

Needless to say, no evidence exists for either of these descriptions; at the time, nearly all articles on the case either were neutral (if critical of the lacrosse players’ character) or presumed guilt. And the administration of Duke president Richard Brodhead went out of its way to meet with (some would say appease) black student groups on campus. Racially charged events certainly existed—Group of 88’er Houston Baker’s screed against the white lacrosse players, black Duke students surrounding lacrosse player Bo Carrington on the campus quad demanding that he turn in the rapists—but these were events in which African-Americans, not whites on campus, were in the wrong.

After ringing defenses of herself, her colleagues, and Crystal Mangum, Davidson’s January 2007 essay concluded with milquetoast statements that Nifong might have committed prosecutorial misconduct and that she favored “impartial legal proceedings” for the falsely accused lacrosse players.

A major premise of this blog has been a lament that no accountability appears to exist in the academy, that the Group of 88 members suffered no consequences for their actions. Outside of the academy, I have repeatedly implied, behavior such as we witnessed from the Group of 88 would have consequences. With this nomination, it appears as if I erred in that assumption.

A coda, featuring Cathy Davidson in her own words:

"I am positive I am not the only professor who was and continues to be adamant about the necessity for fair and impartial legal proceedings for David, Collin and Reade."
--N&O, January 2007 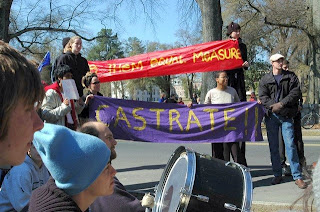 "To the students speaking individually and to the protestors making collective noise, thank you for not waiting and for making yourselves heard."
--Group of 88 statement, April 2006

Imagine if Professor Davidson did not believe in "the necessity for fair and impartial legal proceedings for David, Collin and Reade."

KC, keep shinning the spotlight on these academic scoundrels. We need to remember what they did!

Once President Nan Keohane invited these professors in Duke's front door back in the late 1980's all of them took root and will do most anything to protect their turf while sucking the life blood from the place.

Do undergraduate students have anything to do with these scholars from places unknown?

Their work all sounds like repackaged witchcraft to me.
::
GP

"...no accountability appears to exist in the academy."

The entire summation of "The Duke Rape Case". (except for your blog, that is!)

To make some distinctions within the Group of 88: I think Cathy is sort of a dope and a ninny, more than an active evildoer. She sure doesn't deserve a highly-place government position, but I can hardly be shocked. She is more to be laughed-at, than hated.

This sort of thing is no accident! The whole point here is to fill the NEH (or NEA, NSF, ...) with ideologues who will direct federal grant revenue toward people who will indoctrinate the youth, and politicize race/class/gender/orientation/environmentalism/etc. The reason whole departments at many universities are so biased is because of this bias in how federal grant monies are apportioned and directed.

Regrettably, this money is the primary income for most institutions, as it comes at a fantastically high cost to our society. This explains a great many things that have been highlighted by this whole affair...