Update, Saturday, 12.16pm: The complaint is available on the Bar's website.

The complaint itself is divided into two parts. The first focuses on Cline's efforts to obtain prison visitor information on inmates Yearwood, Richardson, and Kidwell--all, apparently, out of an effort to find proof for Cline's claim of a vast conspiracy between the N&O, a handful of defense attorneys, and Judge Hudson. In the process of requesting this information, Cline made false statements to the court and to prison officials.

On this point, the Bar seems to have Cline dead to rights: she lied to obtain information she had no right to have, and she did so for an improper purpose.

The complaint's second section focuses on Cline's "repeated statements about the honesty, integrity, and fairness of Judge Hudson." According to the Bar, Cline knowingly made false statements (or had "reckless disregard as to whether the statement was true or false"). The complaint produces several of these statements--duly noting the myriad spelling and grammatical errors contained in the NCCU Law grad's various motions to the court.

Cline, the complaint claims, "brought the office of the Durham County District Attorney into disrepute." (Could her attorney argue that the office was in such disrepute that nothing Cline could have done could have brought it into further disrepute?) The complaint also alleges that Cline's statements undermined confidence in the judicial system--except, I suppose, for roving-character-witness-to-unethical-DA's Judge Marcia Morey--and were made with "reckless disregard for the truth."

The Bar concludes by charging Cline with violating five acts that violated ethics rules, two relating to the prisoner visitation record requests, three related to her false and inflammatory statements about Judge Hudson: 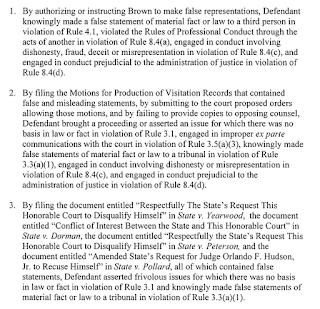 Joe Neff brings the word at the N&O.

And speaking of ethics, DukeProf pointed me to this quite remarkable comment from the chair of the search committee that recommended Duke hiring Paula McClain as graduate dean. According to the Chronicle,


The top three candidates also faced tests of “background due diligence,” [committee chair Calvin] Howell said. The committee conducted a poll in an effort to understand how each candidate was viewed publicly. In the past, McClain has been criticized for her involvement with the “Group of 88”—University professors who signed a controversial advertisement printed in The Chronicle following the 2006 lacrosse scandal. McClain’s involvement in the controversy did not cross a “threshold of concern,” Howell said. “She’s a political scientist and that’s what they do, they take a stance,” Howell said. “You’re not always on the right side of history, but as a scholar you have to have a voice.”

Imagine if instead of presuming the guilt of her own school's students, McClain has issued a public statement urging the Supreme Court to overturn racial preferences. Does anyone who saw how President Brodhead handled the issue this spring believe that Duke's response to such a candidate would have been "that’s what they do, they take a stance . . . as a scholar you have to have a voice”?

The inference from Howell's statement: McClain was on the wrong side of history, but Duke nonetheless put her in a position that depends on her good judgment.
Posted by kcjohnson9 at 11:13 PM 19 comments:

[Update, Saturday, 5.57pm: And, in a further aspect of the annals of non-accountability: Duke has just extended Richard Brodhead's contract for five years. In a statement, the trustees praised Brodhead's "inspired leadership." The statement speaks for itself.]


As noted many times before, a major theme of this blog has been the utter lack of accountability for the faculty members and academic administrators whose behavior in the lacrosse case failed to meet even the minimal ethical standards that a world-class university should expect of its faculty. Duke provided yet another reminder of the pattern earlier this week, when it named Group of 88'er Paula McClain--yes, that Paula McClain--as dean of the university's Graduate School and vice provost for graduate education.


In announcing yet the latest Group member to receive a promotion, President Brodhead hailed McClain as an "outstanding university citizen." And he singled out for particular praise "her concern for the well-being of individual students."


That's a very interesting description of McClain, who in 2006-7 displayed an utter indifference to the well-being of dozens of Duke students.
This is the record of Duke's new graduate dean, an "outstanding university citizen" who has demonstrated "her concern for the well-being of individual students."


I'm sure McClain's appointment has nothing to do with Brodhead's recent remarks in which he profoundly apologized for not appointing more women and/or minorities to upper-level administrative posts--even as he, a white male, refused to resign to allow the Duke trustees to appoint a female or minority president.
Posted by kcjohnson9 at 7:48 PM 17 comments:

[Update, 6 May, 10.33am: As of this morning, the comments section in which Adjunct Prof. Murphy made her false statements is not visible on the P-L website.]


[Update, 5 May, 11.39pm: Rule 8.4(c) of the Massachusetts Rules of Professional Conduct deems it "professional misconduct for a lawyer to  . . . engage in conduct involving dishonesty, fraud, deceit, or misrepresentation." It is hard to see how Murphy's lengthy, and repeated, fabrications in her public comments about the lacrosse case do not violate this standard.]


Adjunct law professor and serial fabricator Wendy Murphy, Esq., is at it again, this time on the pages of the (Quincy, MA) Patriot-Ledger. Pressed on her pattern of fabrication in the lacrosse case, Murphy unleashed the following:


I also very much value bloggers who note the Duke case. It enables me to repeat things the public rarely gets to read about the case. Once again, I'll include a few key facts [sic] here:

The public should be demanding full disclosure the entire file - or at least disclosure of all eyewitness statements and all reports related to forensic testing on the broomstick.

Murphy has a remarkable ability both to outright lie and to issue highly misleading statements (for which she lacks evidence) but which also can't be disproved since it's impossible to prove a negative. That said, she manages at least four false statements in 217 words:

(1) There was no "forensic testing on the broomstick," because no evidence exists that the police ever seized a broomstick. How police could release testing that never occurred Murphy does not say. [A note: on 27 April 2006, on national TV, Murphy gave a completely different interpretation about forensic tests on this non-existent "broomstick evidence," asserting that the DNA tests showed no matches to lacrosse players "because a broom handle was used, which by the way, doesn't produce DNA when you put it inside someone."]

(2) No version of events--even any of the myriad, contradictory versions of events offered by false accuser Crystal Mangum--ever claimed that any of the falsely accused players "threatened to rape the victim [sic] with a  broomstick." Two statements (those by one of the captains and the other dancer, Kim Roberts) referenced an unindicted player boorishly urging Roberts to use the broomstick as a sex toy in the dancers' "show"; both statements said Roberts took offense; and no one (except Murphy, it seems) mentioned the broomstick as an element of any crime.

(3) Mangum was not "offered 2 million dollars to recant." The claim originated from an article from "reporter" Cash Michaels; a subsequent investigation by the DPD not only found no evidence of the claim, but had Mangum herself denying it. Michaels' source, Mangum's "cousin Jakki" (a/k/a Clyde Young), subsequently admitted that months would pass during which she did not speak to her "cousin."


(4) Mangum never "hired a very powerful attorney in Florida." The attorney to which Murphy referred, Willie Gary, briefly offered to represent Mangum pro bono, but does not appear to have ever actually met her, and in any event quickly lost interest in Durham affairs. Moreover, Gary's involvement in the case (such as it was) occurred before, not after as Murphy claims, the false report of a bribe offer--rendering illogical Murphy's mention of Gary.

Beyond the false statements, Murphy provided at least two misleading ones:

(1) North Carolina attorney general Roy Cooper elected not to prosecute Mangum not because of what the parents said or wanted, but because, as he publicly noted on 11 April 2007: (1) Mangum's mental illness was so extensive that she might have believed her myriad false tales; and (2) he feared that prosecuting Mangum could delay the healing process in Durham. In any event, the decision on whether or not to prosecute Mangum had nothing to do with Nifong being prosecuted for criminal contempt, which involved his lying to a judge in open court about whether he had turned over all the DNA evidence to the defense.

(2) It's quite true that roughly 1000 pages of the case file never were released. But as Murphy well knows, no reporter ever saw that material because Judge Osmond Smith sealed the pages, which included the records of Mangum's mental health treatment. Murphy's insinuation that this material would somehow enhance Mangum's claims--as opposed to showing clearly why Mangum lied--is beneath contempt.

Keep in mind: this is the person that the "good-journalism" organization, Poynter, not only uses as a source, but considers worthy of an invitation to guest lecture in a seminar for journalists.

I have e-mailed the Patriot-Ledger's web editor to ask about the paper's policy regarding the posting of false statements by P-L writers, and will update this post if I receive a reply.
Posted by kcjohnson9 at 2:06 PM 15 comments: