In the early stages of the lacrosse case, Orin Starn distinguished himself as among the Duke faculty members most eager to exploit his own students’ distress to advance his campus agenda. The Sociology professor never seemed to miss a chance to condemn the lacrosse players—and Coach K, after he belatedly spoke up against the faculty mob—as part of his crusade to transform Duke into a version of Haverford or Swarthmore, schools with insignificant athletics programs. (In late summer 2006, after months of revelations of Mike Nifong’s procedural improprieties, Starn even proclaimed that the case nonetheless needed to go to trial, since “most Durhamites want to hear all the evidence before passing judgment,” as if basic principles of due process needed to give way to the desires of “most Durhamites.”)

This semester, Starn is teaching an on-line open class entitled “Sports and Society,” which a Duke press release breathlessly describes as an exploration of the “intersection of sports and American culture.” Among the invited guest lecturers . . . “sports studies experts”(!!) like Group of 88'er Grant Farred (who perhaps can expand on his thesis that former Houston Rockets center Yao Ming represents “the most profound threat to American empire”) and former New York Times columnist Selena Roberts.

Given his own repeated assaults on the lacrosse players’character, it comes as little surprise that Starn would deem credible a “journalist” who engaged in a character smear against his own institution's students only days after the case first went public, and then dissembled about what she wrote once the case collapsed. But perhaps Roberts’ more recent work has restored her standing?

As it turns out, Roberts’ journalistic credibility has been much in the news lately. After her departure from Sports Illustrated, Roberts moved on to a website called “Roopstigo,” a “revolutionary digital network that presents original sports content on demand for fans who demand more.” The “founder and CEO” of this entity is Selena Roberts.

The site was the talk of the sports world in early April, when Roberts published a 4000-plus word exposé of the Auburn football program. The article awkwardly combined an inquiry into criminal charges against four former Auburn football players with loosely-sourced allegations of rules violations by the Auburn coaching and administrative staff. Almost immediately after publication, the latter part of the article collapsed, as “source” after “source” claimed that Roberts had misquoted him, or worse.

The more interesting aspect of the article, however, came in its first area: Roberts suggested that one of the accused football players, Mike McNeil, was likely innocent of the charges against him, and had been the victim of some type of misconduct by authorities. The article never precisely explained who violated McNeil’s rights or why they had done so; indeed, the article never even fully summarized the full criminal case against him. Roberts did note that one of his co-defendants had been convicted to 15 years in prison, but her piece veered back and forth between a suggestion that a crime might have occurred but McNeil was innocent to implying that perhaps the whole thing was just a misunderstanding or even a frame orchestrated by Auburn to get rid of football players—with dreadlocks—that the then-coach didn’t like.

What made this line of argument so intriguing is that, of course, during the lacrosse case, this same Selena Roberts had demonstrated not a whit of interest in due process, or the presumption of innocence, or the need for prosecutors or police to behave in an ethical manner. Indeed, she had proven utterly indifferent to each of these themes, and her Auburn article provided no explanation for her newfound passion. Surely the differences in race and class between the respective defendants could not account for her abrupt turnabout.

In the event, Roberts’ article hinged on the defense of McNeil, who was also a principal source for her allegations of rules violations by the Auburn football team. The man with the dreadlocks, she suggested, was persecuted by the former Auburn coaching staff, and she came across as utterly convinced of his innocence. If McNeil was lying about his innocence on the robbery charges, then he had no credibility as a “snitch” (to use one of Roberts’ favorite words) against Auburn.

Imagine, then, Roberts’ humiliation when, only five days after her exposé appeared, the Birmingham News reported the following:

“Judge Chris Hughes sentenced McNeil to a 15-year split sentence that includes 3 years imprisonment and 3 years of probation after the former football player withdrew his not-guilty plea on Monday . . . McNeil, who wore a suit and had cut off his dreadlocks since his last court appearance on Friday, was taken into custody by Lee County sheriff's deputies at the end of the hearing, as his family watched from the gallery.”

The figure Roberts had portrayed as so sure of his innocence that he would go to trial, only five days later admitted guilt. A cynical person might suggest that McNeil’s legal team used Roberts as a way to increase pressure on prosecutors for a better plea deal.

Perhaps Roberts can bring her unique insights on due process in high-profile cases involving college athletes to Professor Starn’s class.

Starn’s offering is free—proving that you get what you paid for.

Email ThisBlogThis!Share to TwitterShare to FacebookShare to Pinterest
Labels: media

After six subpoenas, two court hearings in Maine with several attorneys flown up from North Carolina, and multiple letters to my attorney, Duke's efforts to weaken the First Amendment rights of all news-gatherers in Maine ended below, with Judge Rich's dubious order officially vacated: 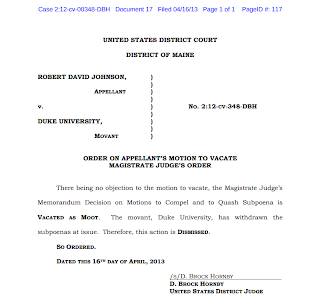 For those who hadn't seen the news, Joe Neff was part of a team of reporters at the N&O and Charlotte Observer who were finalists for the Pulitzer for local reporting, for "for their tenacious joint project investigating how the state’s major nonprofit hospitals generate large profits and contribute to the high cost of health care." (The award ultimately went to reporters at the Minneapolis Star-Tribune.)

The honor serves as a reminder that Neff's sensational work in the lacrosse case was hardly atypical of his overall journalism.
Posted by kcjohnson9 at 11:06 PM 15 comments: