Brian Meehan, the former lab director of DNA Security (DSI) who was fired after the nature of his . . . incomplete . . . report in the lacrosse case came to light, has filed a quixotic appeal to his quixotic wrongful termination suit. (His suit failed to survive summary judgment.) Meehan’s chances of appeal aren’t exactly high, but his appeal has produced a document dump. (The post below contains the choicest excerpts from several hundred pages of depositions, exhibits, and internal DSI documents.)

Two items spring out from the lawsuit documents: (1) the lacrosse case represented a potential windfall for DSI, which had otherwise struggled since its inception financially; and (2) DSI head Richard Clark offered self-contradictory statements regarding whether or how he pressured Meehan to discuss the lacrosse case during the ex-lab director’s infamous 60 Minutes interview.

The documents bring into relief DNA Security’s precarious financial state. Meehan co-founded DSI with two friends from Michigan; he bought the duo out in the early 2000s for a measly $3000 apiece. The company struggled so much financially—Meehan admitted that he did everything, ranging from lab director and “janitor”—that he had to look for a second job in 2004. Ironically, he applied for a position at Richard Clark’s other company (a business whose profit margins peaked in mid-1990s). After some discussion, Clark agreed to purchase DSI for $80,000, with an agreement to keep Meehan on staff for seven years. At the time of the purchase, DNA Security had less than $2000 cash-on-hand.

Over the next two years, DSI lost money every month—until Mike Nifong gave it business in the lacrosse case. (April-May 2006 was the only stretch in which DSI ran a profit between 2004 and 2007.) Meehan himself said that he had followed the early reports of the lacrosse case, and was “excited” to get an opportunity for involvement. Clark seems to have shared his lab director’s sentiments, given that the lacrosse case was the biggest of the company's career.

Both Meehan personally and DSI collectively, therefore, had considerable incentive to do what they could to appease their “client,” the term that they used to describe Nifong. If the client wanted an incomplete report that violated DSI company protocol by failing to provide all test results, such a report he would receive.

Ironically, of course, Meehan’s dubious conduct, first exposed by Brad Bannon and Jim Cooney in the December 15, 2006 hearing, wound up harming DNA Security’s bottom line. E-mails and depositions from other DSI executives recall how law enforcement agencies from Florida to Wyoming ended involvement with DSI after Meehan’s Dec. 15, 2006 performance—if only because they recognized that having DSI do their testing would provide defense attorneys with an easy opening for impeachment.

Meehan’s 60 Minutes interview was a defining moment for the company. DSI brought in an outside attorney, Fred Antoun, to offer both legal and public-relations guidance, and Antoun believed (not unreasonably) that Meehan had to go on 60 Minutes to respond to repair the p.r. damage from his disastrous performance at the December hearing. Clark, who comes across in the documents as even more defensive and arrogant than Meehan (which is saying something), strongly supported the appearance, stating—according to Meehan, anyway—that “any publicity is good publicity.” A few other DSI officials worried about this approach, and Meehan initially didn’t want to submit to questions. The ex-lab director said he changed his mind when reflecting on how his son would think of him otherwise.

Meehan spent three days preparing for the interview, only to flub his lines, and affirm that he committed a “big error” in his handling of the case. Antoun wanted Meehan to confess only to a minor error in judgment and to avoid questions about the December hearing, with the following line: “In retrospect, I didn't put all the stuff in the report, blah, blah, blah.”

The documents offer three tantalizing, though very incomplete, revelations regarding DSI and the lacrosse case. First, Meehan’s deposition features the clearest indication to date that the April and May 2006 conversations between the lab director, Mike Nifong, and Sgt. Gottlieb involved specifics of the case, most significantly how non-lacrosse player DNA could have been transferred to false accuser Crystal Mangum. Nifong, of course, always maintained that his discussions with Meehan never involved anything that could involve theories of the case. Second, DSI admitted that it kept what it called a “Duke Lacrosse case file”—which, unfortunately, is not reproduced in any of the court filings. Finally, Richard Clark, seemingly inadvertently, admitted that the lab remained in contact with its future co-defendant Nifong even after Nifong recused himself from the lacrosse case. There would seem to have been no professional reason for continued DSI-Nifong exchanges after January 12, 2007.

Meehan’s deposition exhibits familiar characteristics for anyone who followed the lacrosse case. There’s “Mr. Obfuscation,” with Meehan trying to compare his having amended his lacrosse report to include all rather than just some of the test results to his having previously amended reports to correct typographical errors. There’s the clueless scientist, who penned emails to his superiors demanding a raise--a few weeks after his disastrous performance in the December 2006 hearing. There’s the defiant Meehan, alternatively blaming Nifong for his problems, affirming that Mangum was “the victim,” and misrepresenting his May 2006 report (which went out of its way to falsely insinuate that Dave Evans’ DNA might be present) as everything the lacrosse players could have wanted.

(Meehan also got a friend, Mississippi lab director R.W. “Bo” Scales, head of Scales Biological Laboratory, to say what a good job he did, and that his May 12, 2006 report was acceptable and even appropriate. Scales added that he charges $250/hr. and $1800/day to testify.)

But perhaps the most remarkable Meehan Moment came in his discussion of the December 15, 2006 hearing. Meehan simultaneously affirmed that he always told the truth at the hearing and that he did nothing wrong in the case. How, then, to explain the following passage, the Perry Mason moment of the case? 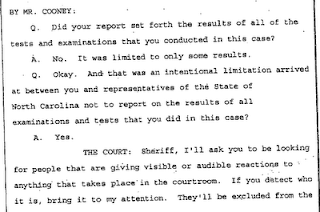 Finally: one of the odder moments of the case for me came when I heard (from two sources) that Nifong was a regular DIW reader. It turns out that the people at DNA Security also checked in on the blog. One DSI worker worried that “blogs were out there” criticizing the company. Clark himself took issue with this DIW post, which portrayed DNA Security as a “fly-by-night” operation that had started in a garage. (Nothing in the document dump has led me to revise my opinion of the company.) And DSI’s Michael Burrows remembered that “one of the web publications had attacked us early on, and rather doggedly.” He said he questioned the wisdom of Meehan going on 60 Minutes lest the DIW criticisms of DSI get a national audience.

These documents reveal a company that was at best over its head in the lacrosse case and at worst either wholly incompetent or blatantly unethical.

How much I will enjoy (although it is probably a fantasy, considering our moribund federal court system)
reading a deposition from Brodhead or Seel...

If you look up "Fly by night" in the dictionary, I suspect there may be a photo of Meehan and/or Nifong.

We are now five years from the incident,
and the perpetrators have managed in all that time to avoid having to testify about their actions.

It's five years today since the event. That's five years that some people have had to live with the constant knowledge that they acceded to, or were complicit in, lies which might have sent innocent persons to prison for thirty years for a crime which they knew never happened.

Maybe they want to relieve themselves of that burden by admitting the truth.

It would be a relief--to them, as much as to anyone.

I think it is a hoot that Liefong read DIW after claiming he never read the blogs. What a fool, an utter imbecile.

Glad you got under their skin, K.C.

DNA security is private, and the state's crime lab is obviously public. Both have had problems. Which is more prone to sloppiness or falsification, public or private forensics labs? Speaking only for myself, I would like to see forensics labs split away from law enforcement and made separate entities (as I believe Roger Koppl has suggested), but I am not convinced this would solve all problems.

In your December 2006 post on DNA, you noted, “5.) The SBI notes had an intriguing line: ‘want to prove fingernail's are (v) and prove (v) was in the bathroom.’ Not exactly an unbiased scientific source." The problem of investigators telling the forensic scientists too much information is not limited to Mr. Nifong’s shenanigans in this one case. And not just DNA evidence can be compromised by the forensic scientist not being blind, as Roger Koppl discussed in CSI For Real. Let me quote from an article by William Thompson and colleagues:

Part of the problem is that forensic scientists refuse to take appropriate steps to "blind" themselves to the government's expected (or desired) outcome when interpreting test results. We often see indications, in the laboratory notes themselves, that the analysts are familiar with facts of their cases, including information that has nothing to do with genetic testing, and that they are acutely aware of which results will help or hurt the prosecution team. A DNA analyst in one case wrote:   "Suspect-known crip gang member — keeps 'skating' on charges-never serves time. This robbery he gets hit in head with bar stool — left blood trail. [Detective] Miller wants to connect this guy to scene w/DNA …"  In another case, where the defense lawyer had suggested that another individual besides the defendant had been involved in the crime, and might have left DNA, the DNA laboratory notes include the notation: "Death penalty case. Need to eliminate [other individual] as a possible suspect."