Followers of the “Duke Events” website and U-stream portal received a rare treat this semester: Group of 88 author Wahneema Lubiano took time away from her two “forthcoming” manuscripts (forthcoming at 14 years and counting) to answer questions on such topics as the “relationship between literature and Marxist theory” in Duke’s online office hours.

In the literature program, explained Lubiano, “we could be attending to the thought of Marx.” 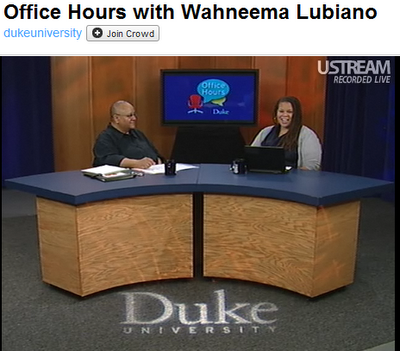 But she also wants to “attend” to the “discourse” of everyday matters, such as a bus schedule. “My students,” revealed she, “wanted to be able to explain to their parents what the Literature program was about that was different from the English Department.” Her example: bus schedules as a text! “People need to know what time is, what durations of time are. You need to think about where it’s going . . . you need to think about what it means to get on a vehicle,” and to move to the relevant section of the bus. The bus schedule allows her students to think about “how we know something.”

To give a related example: my five-year-old nephew is very interested in bus (and subway) schedules for many of the reasons that Lubiano identified. Perhaps he should apply for a position as a tenured position in Duke’s Literature program?

To communicate a thought, Lubiano never uses one word where ten would do. She spends nearly six minutes “analyzing” an Obama speech to the Congressional Black Caucus (at 6.21 of the linked clip). After much verbiage, she comes to a conclusion that anyone looking at a typical political column could receive: that standard black political rhetoric often imitates the cadences and style of the Black church. Lubiano delivers this analysis while taking sure to note that she, herself, is a non-believer.

The host of the program responded to this string of banalities with a breathless reply, “Wow.” Wow, indeed. 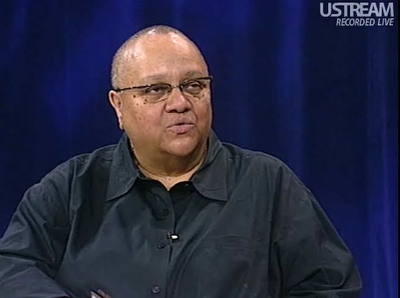 In things like an Obama presidential speech, Lubiano continues, “None of these words are accidental choices.” No kidding.

Lubiano also describes her classroom style, where “I would talk about the discourses that come together.” Sports, for instance—which according to Lubiano, is “an incredibly elaborate discourse.” (She admits that she doesn’t “know anything about it,” but has no problem speaking about it in the classroom.) “You could think of football or food or cancer treatment as a collection of social texts”—all of these things, she says, illustrate the “social order.”

Lubiano excitedly recalled that she was “sitting up all night long preparing for class one day, and . . . I just made a sign: ‘I heart Occupy Wall Street.’” It must be nice to teach a class in which the prof’s prep work consists of drawing a sign to place in her “folio.”


The host says that Lubiano has “written quite a bit” about Anita Hill. “Quite a bit” in this respect would be relative—Lubiano has written an essay on the topic. And Lubiano (see at the 20-minute mark) is such an “expert” on this matter that she apparently believes that former Missouri senator John Danforth’s name was actually Danfort. The discussion about Clarence Thomas revolves around two (apparently randomly-selected) photos of Thomas, one with President Bush and one with Senator Danfort [sic].

Amazingly, Lubiano says that she sees part of her work as commenting on “political history”—and yet she appears to know no more about U.S. political history than a typical college student. She certainly has no research background in U.S. political history. But, keep in mind, her student Melissa Harris-Perry has claimed that devotees of "black feminist" scholarship can rely on "experiential knowledge" rather than actual facts. Appropriately, the session concludes with a question submitted from none other than fellow Group stalwart Karla Holloway, asking Lubiano to reflect on the legacy of Derrick Bell—a race-obsessed law professor whose work mirrored the Group of 88’s “discourse” (to borrow a Lubiano term).

Based on these 40 minutes, Lubiano views her job as pontificating about everyday phenomena, in a way that virtually anyone with a pulse could do. Why it’s taken her more than a decade to produce the two books that she claimed were forthcoming is beyond me.

By the way, this “Online Office Hours” program seems to be a regular spot for Group of 88 figures. Below is a screenshot from Group member Kathy Rudy’s September appearance. 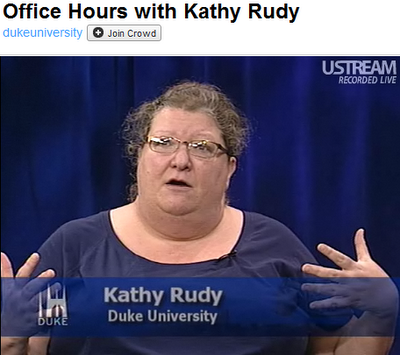 It’s worth pointing out, by the way, that the above comments refer to the thoughts of a figure described (by an unnamed professor) as “one of the smartest people in America.”

skwilli said...
I had a conversation with my dog yesterday that was waaaaay more interesting than anything Lubiano could ever say. Can any student taking one of her classes get their money back? Or how do I apply for a position in her department? I'm pretty sure I write just as well as she does, and I have many more interesting stories. How can Duke survive with crap like that?

12/12/11 7:41 AM
Anonymous said...
I hope parents of every kid even thinking about applying to Duke watch this. Before anyone writes a check to Duke Univ. they should know the pap that Duke is "selling."

12/12/11 9:27 AM
Anonymous said...
Just sent Duke my "88 cents" in response to their umteenth fund drive request. They can kiss my experiential backside.
My kid, and my meager funds, go to a real university where intelligence, production, honesty, hard work and integrity are words directly associated with the FACULTY! And taught daily to all the students. They don't harp on the evils of capitalism, the horror of racism, the disgrace of homophobia....they demand, live and teach by example....the value of hard work, the truth of real human rights, and the silliness of discrimination based on sexual preference. Shame on Duke for hiring and retaining these empty suit clowns. Cline would be a great Duke faculty member....she could teach Hooked on Phonics.

12/12/11 10:06 AM
Anonymous said...
I suppose it would politically incorrect to describe the arguments of these people as "fatuous"?

12/12/11 10:14 AM
Anonymous said...
If this is in any way indicative of the humanities and social sciences in American higher education, it's no wonder so many recent college graduates in this country are jobless. Before condemning Duke as an institution, however, it's worth noting that there are many excellent faculty teaching rigorous material in the physical sciences, engineering, economics, public policy, and others.

My son graduated from Duke in 2006 and majored in chemistry and economics. I got my monies worth. But I lament that my Alma mater employs, even promotes, such lunatic fringe. Our nation is experiencing unprecedented global competition. Society cannot afford to waste precious resources on self indulgent tripe masquerading as education.

12/12/11 1:50 PM
Lois Turner said...
The "People of Walmart" comment is spot on, and I suspect these two would take it as a compliment. No one expects middle aged college professors to look like, say, Helen Mirren, but this level of slovenliness and unprofessionalism as to personal appearance gives an awful impression of the university.

I note that the renowned Duke Diet & Fitness Center is "offering extra savings on new client seasonal rates" until December 19. Maybe someone should alert our dynamic duo of pie-loving profs.

Gosh. All those years spent in painstaking effort to understand Plato, Aristotle, Sophocles, Aquinas, Locke, Kant, Shakespeare, et al. – and then the countless hours of racking my brain to compose clear and engaging lectures on those ideas. (All because, silly me, I thought that's what professors did.)

I wish I had realized sooner that I could've waited until the last minute for a random thought to strike me -- about, say, the "social order" of cupcakes. (After all, there is lots I don't know about cupcakes.) And then write on the board: "I heart cupcakes."

Oh, wait. I'm not allowed such professional negligence because I'm not among the race/gender anointed ones.