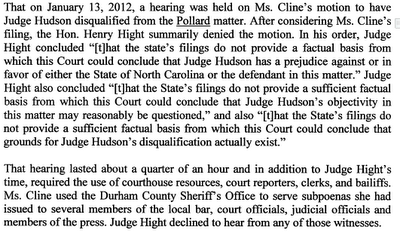 Will bring news when available on whether WRAL will stream the Feb. 13 hearing.]
The dysfunctional world of the Durham DA's office continues. A hearing on her case will take place on Feb. 13, assuming she does not resign first. Given Cline's delusional approach to affairs over the past several months, I'm not counting on an early resignation.
WRAL has posted Franklin County Judge Robert Hobgood's order; based on his preliminary findings, Cline's chances in the Feb. 13 hearing do not appear good.
Hobgood starts with a summary of the Allen case: he notes that evidence existed for Cline to bring the case to trial, but also finds that Judge Hudson's dismissal of the case (because the state hadn't turned over evidence) was correct. Hobgood reports that it was "apparent" that Cline found this decision "extremely frustrating," and that thereafter, "signals began to appear that Tracey E. Cline was losing her ability to exercise professional restraint and civility toward Judge Hudson."
Hobgood dismissed a couple of elements of Kerry Sutton's affidavit, but found probable cause for 14 paragraphs in her affidavit, and suspended Cline (with pay) until the hearing is held.
[Update, 10.36pm: Ray Gronberg of the H-S reports that as of Friday evening, it was unclear who would serve as acting DA until a final resolution of Cline's case occurs.]
Posted by kcjohnson9 at 5:12 PM

Is Hobgood a communist?

When Mike Nifong had his little rampage, we were told that there was no mechanism under state law to remove him. Untrue, apparently.

I guess the difference is that you have to falsely accuse a judge instead of an innocent citizen.

KC,
Lot's of rock groups have one big record.Norm Cash had one monster season for the Tigers. Even James Watson never published after the double helix paper . (Though ,of course Crick was different.)
But this DA's office is able to repeatedly amaze
Corwin

I'm surprised that Cline hasn't arranged to have a noose place on her door, ala' Madonna Constantine.

Peas in a pod, those two.

So, it appears the judge will De-Cline her continued sojourn as DA?

NC's retiring governor, One and Done Bev Perdue, will be appointing an interim Durham DA and a permanent DA after Cline is deservedly booted next month.

Note that this is yet another example of how Durham cannot police itself or manage its own affairs. One wonders how this latest episode plays into the outstanding lawsuit where this very point has been made in the filing-- in addition to damages, the plaintiffs seek to have a third party manage the Durham's criminal justice system. Durham keeps making the point for them.

Durham is in decline.

"It was unclear who would serve as acting DA until a final resolution of Cline's case occurs."

I hear Mike Nifong is available.

And he knows the system in Durham.

I haven't been posting for awhile but do read your good work(s). This DA is a disgrace.I wonder what is wrong with the water in Durham. People seem to believe they are in charge of the world when they get a small position of authority. They don't understand there is always someone higher in the pecking order. Also, the blogs shed light on many matters that would not otherwise be known.

Yes, absolutely: that is the lesson!!

Would Durham DA Cline be able to run again for this job the next time an election is held? Maybe she could go to Duke Law school for some remedial training in spelling. , writing legal briefs, and legal ethics while she is on sabbatical.

Hobgood is not a communist. You're probably thinking of Eric Hobsbawm.

People seem to believe they are in charge of the world when they get a small position of authority.

John W. Campbell (known as the “father of modern science fiction” due to his cultivation of a generation of famous writers as a result of his long-time editorship at Astounding/Analog) said in one of his editorials that it isn't true that “Power corrupts and absolute power corrupts absolutely,” as Lord Acton alleged — because folk can often wield power without being corrupted, if they are subject to having to answer for the usage of their power.

Rather, what corrupts is immunity from the consequences of one's acts. Thus, a minor official or bureaucrat might become quite corrupt, if relatively free from proper supervision and controls.

KC,
Yesterday Obama fired a warning salvo accross the bow of all institutions of higher learning, to wit, the government will monitor the tuition and, I suspect the percentage of minorities on the faculty and in positions of prestige, i.e., deans,student organizers, even Trustees, etc. Duke may end up being ahead of its time.
Big Al

What will Sidney Harr do when he can no longer say, Mike Nifong is the only DA in NC history to be disbarred? :-)

Obama's SOTU tuition/federal aid remarks reflected a line of critique (that federal aid to tuition does nothing more than raise tuition costs, and thus subsidize colleges) that's come almost exclusively from the right side of the political spectrum, especially from libertarians. I've never before (at least before your comment) seen this line of critique linked with federal demands for quota hires, which libertarians obviously oppose and which Obama (whatever he might personally believe) would never support because to do so would be politically suicidal.

I also am unable to discern any connection between Obama's SOTU proposal (which has, I should note, no chance of adoption) & the past behavior of the Duke administration. Indeed, its my sense that college & university administrations almost universally oppose the proposal outlined by Obama. I don't know what the Duke BOT position is, but I'd be shocked if they supported it.

Can't wait to see whether Cline can perform competently in front of the judge -- presenting evidence, cross-examination, etc.

Cline may well be the long sought after proof that the Peter Principle does indeed exist.

FWIW, I was on the other side of a few cases criminal cases in Durham where Tracey was involved. From what I remember, she was professional and did the right thing as she saw it. Two things are clear however:
1. Tracey has lost it - it looks like an organic issue to me - a small stroke or chemical exposure. Mitch leaving that office should have been a red flag to everyone that something was seriously wrong.

2. The culture of the Durham DA's office, as shown time and time again, is to win cases at all costs. Nifong and Cline built their careers in that office, and they both treat criminal cases as personal wars.

Prosecutors need to be way above the fray, considering things like use of resources and benefit to society. Many of the DAs in Durham (and sadly around the country) cannot separate themselves from their work and have no role models for how to make decisions about dismissals. A dismissal is not a personal failure for a DA, it's often a good rational decision.

It gives me a sense of calm to know that Durham hasn't quite given up on "Teh Crazy". Change must be hard.

These actions must be weighing heavily on Cline's conscious. I imagine she will fight the deformation rather than flea her office.

I'm keeping my fingers crossed Stanback can clean out the Augean Stable that is Durham. Any chance?

We really need Mitch Garrel back in there!

Lois - Hobsbawn is a communist, but also a serious historian. Not like the modern pc leftists who dominate academia, people like the American Historical Association: http://durhamwonderland.blogspot.com/2010/12/ahas-shame.html

I was wrong - Hobsbawm hasn't been a communist for decades. He's still some kind of leftist though: http://www.gilad.co.uk/writings/newsnight-on-responsible-capitalism-prof-eric-hobsbawm-19jan.html#entry15031525