In the past two days, the city of Durham and former DPD officers Mark Gottlieb and Ben Himan have filed their formal response to the falsely accused players’ lawsuit. The responses came four years after the players amended their complaint against the city and its police officers—a time in which the lawsuit was substantially narrowed, thanks to a ruling that embodied the spirit (if not, in total, the outcome) of the race-baiting 4th Circuit judge Roger Gregory.

The filings are, in many respects, par for the course—deny, deny, deny. To the extent things were clearly done wrong, blame Nifong or Mangum. (Bizarrely, the city’s filing constantly uses scare quotes around the undisputed “facts” of the case.) Cast aspersions against the victims in this case by portraying them as rich out-of-staters. Play off the absurd 4th Circuit holding (that, because DPD officers were candid with Nifong in disclosing the non-existent nature of the case even as they teamed with him to manufacture inculpatory evidence, they were not legally vulnerable for their actions) by repeating, over and over again, that the police did not conceal any information from Nifong.

All that said, the filings do contain some interesting items. And, in that respect, the three documents provide a reminder of (by all but decimating the case) how the 4th Circuit’s ruling ensured that many aspects of the DPD’s misconduct likely will remain unknown. I’ll analyze the Durham document here, and the Himan/Gottlieb documents subsequently.

The False Accuser: Then and Now

Durham now “admits that . . . several witness statements attributed to her that are not fully consistent with one another.” Specifically, here’s how the city describes the wild disparities between Mangum’s initial interview with the police (when she claimed that one of her attackers weighed 270 pounds, gave descriptions that matched none of the people ultimately charged, and said that she was 100 percent sure she saw someone who wasn’t even in Durham that night) and the rigged photo array upon which Nifong and the DPD based charges: “The City admits that Sgt. Gottlieb and Inv. Himan interviewed Mangum on March 16, 2006, that she provided a written statement on April 6, 2006, and that her statements were not always consistent.”

The city further admits that on March 27, 2006, “Inv. Himan expressed concerns to Nifong about Mangum’s credibility.”

Really? When, precisely, did the leaders of Durham PD, who the city admits read these reports, discover this information? Why was this information never communicated to the public while the case was ongoing, especially since the information was available to DPD leaders as of no later than April 7, 2006? And why, perhaps most important, did Matrk Gottlieb (according to his own deposition to the State Bar) tell the grand jury something different—that Mangum was consistent in all of her tales after she encountered former SANE-nurse-in-training Tara Levicy at the hospital?

The Durham response elected not to engage with any of these questions.

In its filing, Durham formally denied “that there was any agreement on the part of the City, the Durham Police Department, the Supervisory Defendants, or individual police officers that Nifong would direct or help direct the police investigation.”

This statement makes no sense. Gottlieb’s notes admitted that as of late March, he had been ordered to take direction from Nifong. Thereafter, the record of the case illustrated that DPD officers consistently accepted orders from Nifong, even when he instructed them to violate DPD procedures (the April photo array) or behave in odd ways (look beyond the state DNA lab to hire the disgraced Brian Meehan to provide DNA analysis). If there was no agreement for Nifong to direct the investigation, why did DPD officers accept Nifong at these critical junctures? According to the city of Durham, all of this was merely “work[ing] cooperatively with the District Attorney’s office.”

And if Nifong wasn’t directing the police investigation after March 29, 2006, then who was?

In late March 2006, Cpl. David Addison, both as acting DPD spokesperson and in his capacity as Crimestoppers liaison, made a series of inflammatory statements about the lacrosse players. From where did he get his information?

Durham now pulls back the curtain on the process: “The City admits that Inv. Himan and Addison prepared Crimestoppers flyers.” That would be the same Inv. Himan, who more than a week before the poster below appeared, “expressed concerns to Nifong about Mangum’s credibility.” 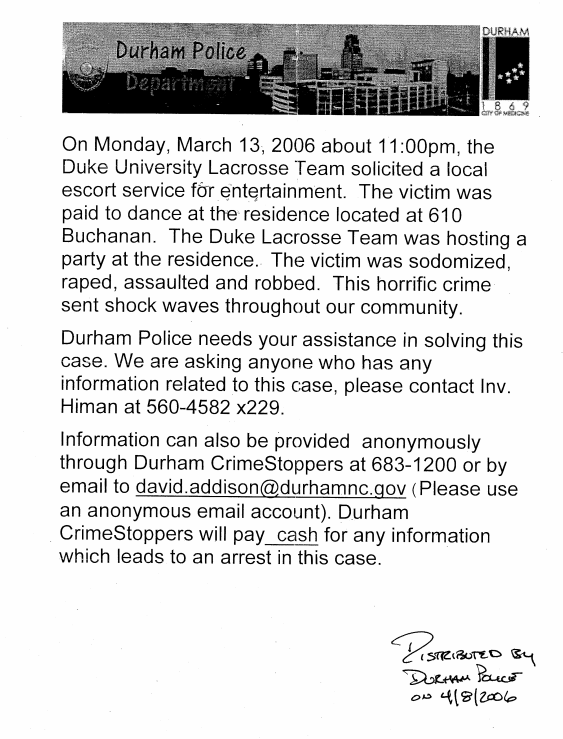 Why was a DPD employee who had concerns about Mangum’s credibility in private willing to tell the public something entirely different?

The city—in sharp contrast to public statements coming from Durham Crimestoppers in March 2006—now affirms that the three captains “offered” their “cooperation” with police, that they “submitted to individual interviews, and were cooperative.” The city even admits that at least one of the captains offered to take a lie detector test, an offer that was spurned.

The Durham response does not explain why a DPD employee, David Addison, did not tell the truth about the players’ cooperation, nor why Addison subsequently was promoted despite misleading the public.

The city confirms that Durham’s second disgraced former district attorney, Tracey Cline, came up with the (seemingly unconstitutional) idea for a non-testimonial order against all 46 white lacrosse players, even those that the DPD had no reason to believe even attended the party.

The City of Durham admits that “at some point” “some” DPD leaders learned of the contents of Sgt. John Shelton’s report. (Shelton, recall, was the first officer to encounter false accuser Crystal Mangum, and penned a report expressing doubts about her veracity.) When did DPD supervisors learn of the report? Why did they learn of it? Did they, as Shelton has claimed, retaliate against him for penning a truthful document that contradicted the department’s preferred storyline?

In 2006, the case was consistently presented as Himan’s (only Himan, for instance, testified at the second grand jury). There was obvious p.r. benefits to this approach, since it allowed Durham to avoid troubling questions of Gottlieb’s past history of selective mistreatment of Duke students.

Now that they’re under oath, however, DPD leaders have admitted that Gottlieb was “in charge of the investigation,” which Durham (in curious wording) describes as “related to a party attended by Duke students in Trinity Park.”

Durham announced that it “denies that the April Photo Array was governed by General Order 4077,” which required five filler photos per every suspect.

Why? Durham refuses to say.

The city cites North Carolina law to shield Gottlieb and Himan from any misleading testimony they might have given to the grand jury—a reminder of how the grand jury process, at least in North Carolina, not only fails to protect innocent defendants, but actually harms them.

Durham further claims that “the prosecution of Plaintiffs was supported by probable cause.” That the city could claim that “probable cause” existed to indict people who were (as the state ultimately admitted) actually innocent speaks volumes as to how the city of Durham defines “probable cause,” at least in cases where it’s politically useful to obtain indictments.
-----------------

Perhaps the most chilling line from the city’s filing was the following assertion: “Plaintiffs’ own conduct was a superseding/intervening cause of any injury or damage sustained by Plaintiffs.”

Reade Seligmann and Collin Finnerty attended a party they played no role in organizing and drank some beer. According to one of the largest cities in North Carolina, that “conduct” was the cause of their being indicted for a crime that never occurred, thanks to “evidence” gathered by the DPD and Mike Nifong.
Posted by kcjohnson9 at 9:48 PM

Is Himan a Communist?

Thanks for this update. I am in a pre-law school paralegal program. I started to look up Nifong after reading about malicious prosecution in my Torts class. Your post was the one I found in searching for the most up to date info. Where has Nifong found employment?

"Where has Nifong found employment?"

Nifong has, AFAIK, a state pension of $100,000+ per year; and his wife also works for the state (with decades of seniority).

IOW, they are being well-supported by the public.