On the Rev. Barber

Amidst the lacrosse case, more-than-occasional comparisons occurred to the Tawana Brawley rape hoax. The cases, in fact, don’t seem to me all that much alike: there was no prosecutorial misconduct in the Brawley case (if anything, there was the reverse), and there was nothing like 88 Columbia or Fordham or NYU professors taking out a full-page ad to proclaim something “happened” to Brawley.

But there is one similarity between the two cases—the eventual mainstreaming of advocates for the false accusers. In the Brawley case, of course, the highest-profile such figure was Rev. Al Sharpton, who has evolved from a charlatan to a Democratic presidential candidate (2004) to host of a talk show on which many Democratic politicians appear.

In the lacrosse case, the best example of mainstreaming comes with the Rev. William Barber, head of North Carolina’s NAACP. Since Republicans captured control of the state’s legislature in 2010 and then governorship in 2012, Barber has assumed a high-profile role in the state’s politics. In 2012, even as the state’s African-Americans favored marriage discrimination by a 20-point margin, Barber led the opposition to Amendment One; its passage made North Carolina almost certainly the last state to add an anti-gay amendment to its state constitution. And last year, Barber again marshaled protests against what election law expert Rick Hasen has termed one of the most restrictive voting laws in the nation, a measure that will disproportionately affect the very poor, minorities, and students.

Those who followed the lacrosse case, however, should recall a very different image of Barber than a figure who courageously stands up against majority sentiment on behalf of civil liberties and civil rights. Instead, his organization rivaled the Herald-Sun and the Group of 88 in serving as the biggest local cheerleader for Nifong’s case.

That’s not the image, however, a reader would have gathered from Anne Blythe’s recent profile of Barber. Blythe (whose reporting on the lacrosse case I generally admired) wrote the following: “In 2006 and 2007, he frequently weighed in on the Duke lacrosse case, highlighting issues of racial disparity while urging people to withhold judgment on the accused and accuser until the legal process played out.”

I suppose it’s true that Barber’s remarks at the time could be seen as “highlighting issues of racial disparity”—though since the events involved a prosecutor exploiting the case to maximize his share of the black vote, Barber should have emerged as a fierce critic of the race-baiting Mike Nifong, something that most definitely did not occur.

Suggesting that the reverend wanted people to withhold judgment, in any case, is hard to square with Barber’s record. It’s true that—unlike the Group of 88—Barber was savvy enough to toss in a line about withholding judgment to most of his public remarks. But everything the NAACP did in the lacrosse case presumed guilt.

The State NAACP presented an 82-point “memorandum of law” in August 2006. Riddled with factual errors—all of which tilted the presentation in favor of Nifong’s case—the “memorandum of law” falsely claimed that: “the only Black [lacrosse] player, a freshman, left the party before the dancers arrived”; “the lacrosse team member asked the women to dance and simulate sex acts between them, similarly to scenes from a book and movie that several of the Lacrosse team members enjoyed reading and talking about—American Psycho”; “after about three minutes of dancing . . . there were racial remarks made”; and perhaps most outrageously, a simple invention of facts to make Reade Seligmann look guilty: “around 12:20, some men who saw the vulnerable Ms. M returning to the house called their friends who had taken cabs and gone to get some cash from an ATM. Some returned. Sometime between approximately 12:21 and 12:53, Ms. M has stated she was kidnapped into the bathroom, beaten, robbed, choked, and vaginally and anally raped.”

Lest there be any doubt of Barber’s connection to the memo, written by NAACP legal advisor Al McSurely, here’s a screenshot of the NAACP’s then-webpage, with Barber’s photo alongside the memo. 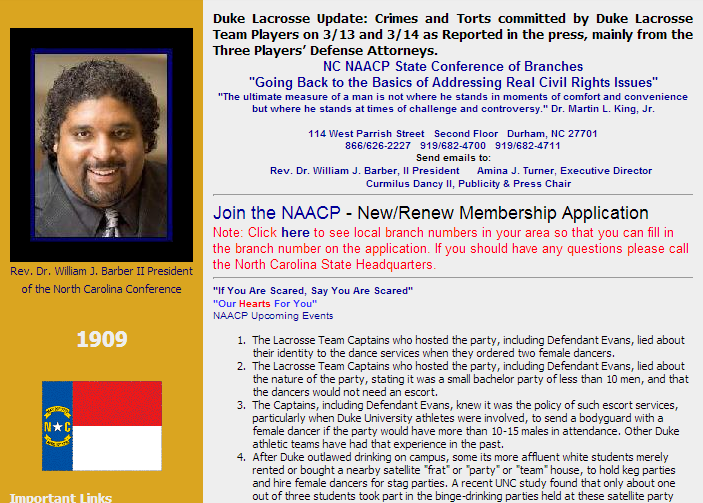 Note that the webpage also leads with the wild claim—right next to Barber’s face—about “Crimes and Torts [no withholding judgment here] Committed by Duke Lacrosse Team Players on 3/13 and 3/14.”

It’s rather difficult to reconcile the McSurely memo, McSurely’s repeated condemnation of the defense attorneys, the state NAACP’s call to gag the defense attorneys, and the assertion next to Barber’s face of the lacrosse players committing “crimes and torts” with a description of Barber as a figure who urged “people to withhold judgment on the accused and accuser until the legal process played out.”

The State NAACP also appointed a legal “monitor,” NCCU professor Irving Joyner, to observe the case. Joyner spent most of his time apologizing for Nifong’s conduct in a manner that might have made William D. Cohan blush. Over the course of 2006, Joyner and McSurely repeatedly took pro-Nifong stances that contradicted longstanding positions of the national NAACP; their (and Barber’s) silence about the rigged photo array was particularly outrageous given past NAACP work on the question.

Barber himself traveled to Duke Chapel as Nifong’s case imploded, and delivered a sermon widely interpreted as attacking the character of the lacrosse players. In 2008, he offered a wildly misleading account of his and his organization’s role in the case in a WRAL chat. And, even after the legal process ended with AG Cooper’s report, there was some talk from the NAACP of a new (what could now be called Cohan-esque) investigation into the case.

Barber deserves praise for opposing state government discrimination against gays and lesbians, the poor, students, and minorities. But simply because he’s redeemed himself in recent years is no reason to ignore (or misleadingly portray) his record in the lacrosse case.
Posted by kcjohnson9 at 12:01 AM

KC :
The link to the 82 point legal brief didn't work for me.

Rev Barber had his '14 Point Agenda' back in 2006, a mish-mash of the usual talking points, demands for reparations, etc. Curiously, it ended with 'Bring Our Troops Home from Iraq Now'.

How much better it would have been had Barber included suggestions for reforming NC's justice system, using examples that the DukeLAX hoax revealed in their glaring worst. Among them:

- No PC hearing after Grand Jury


These are just a few of the big ones.

Cohan, Coleman, and even KC have said that Conservatives didn't 'stick around' to somehow assist in effecting changes in the system.

I submit that it was up to the locals to do so - it's their state, and their 'persons of color' who bear the brunt of the abuses.

Back during the hoax, the State leg was overwhelmingly Democrat, the change to R has happened only recently.

I was in attendance at Duke Chapel the day Barber delivered one of the most shameful, racist, deceit-ridden speeches I have ever heard. No, it was not a sermon. It was a tirade, clearly aimed at those "rich white boys". I sat through it all....and watched some people get up and walk out in shock.
Barber may support equal marriage rights but, under all that puffery about gay rights, Barber remains a mouthpiece for the race-gender-class crowd, forever blaming "whites" and "white privilege" for every malady in our world from hangnails to global warming.

Probably not since half the whites (at least) resent what the rich corp. (mostly white) folks have done to destroy this country, other countries, and the planet as well.

Is William Barber a Communist?

5/14/14, 3:34p:
Maybe, but not in my little community of Clemson. My friend is the troop leader of a mostly white group. He knows everyone in town and enjoys their respect. Lowes where we end up everyday has a racially mixed workforce. Everyone is happy all the time.