[Update, Tuesday, 3.45pm: On the Atlantic site, Andrew Cohen praises Vance's decision. His conclusion: "No one ever said the criminal justice system is pretty, or perfect, or capable of always delivering a narrative that has a clear beginning, middle, and end. There is no legal right to a happy ending -- or even a dispositive one. The leavening truth here is that the Constitution worked pretty much the way it is supposed to work in these circumstances. Under the Supreme Court's precedent in Brady v. Maryland, prosecutors have a duty to share with defense attorneys any exculpatory evidence they find. This the prosecutors did, to their eternal credit. Moreover, a district attorney has an ethical obligation not to try a case he or she doesn't believe can be won. This, too, the district attorney considered."

Cohen had a far different take, however, on the lacrosse case, writing in June 2006 that discussion about Mike Nifong's procedural misconduct meant that, in the media, “there is no balanced coverage in the Duke case. There is just one defense-themed story after another.” The lacrosse players, he claimed in apparent ignorance of the first month of the case, benefited from “race and money and access to the media.” And when the victims of a rush to judgment were college students rather than the former IMF head, Cohen's interpretation of legal ethics went as follows: “We haven’t seen all of the evidence, haven’t examined all of the testimony; haven’t had the privilege of seeing the case unfold at trial the way it is supposed to.”]

As I’ve noted previously, there were significant differences between the lacrosse case and the allegations against French politician Dominique Straus-Kahn: in the DSK case some type of sexual contact occurred; and even his version of events reflected poorly on the former IMF head's character.

It turned out, however, that the most significant difference between the two cases involved the office of district attorney. With the exception of an ill-timed public statement early in the case, Manhattan DA Cyrus Vance, Jr., followed both ethical guidelines and normal investigative procedures. Mike Nifong, of course, did not. A few items from the dismissal motion filed by Vance’s office:

Vance's office spelled it out in the dismissal motion: 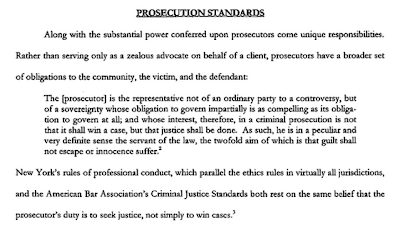 Nifong, by contrast, spoke of false accuser Crystal Mangum as “my victim,” and as late as Dec. 2006 ignored basic ethics and described his role as purely a gatekeeper: “If she says, yes, it’s them, or one or two of them, I have an obligation to put that to a jury.” These comments came several weeks after what was perhaps his most chilling remark of the entire case, when he claimed that not the evidence nor even his beliefs but instead divisions within the community sufficed as a cause to bring the case to trial.

Consider these passages from the motion, describing the Manhattan DA office’s continuing investigation: 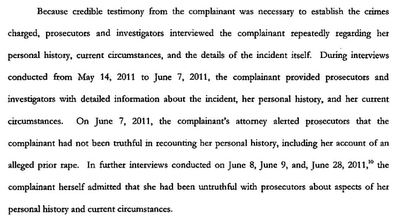 This investigation included a critical analysis of the medical evidence:

Nifong, by contrast, preferred willful ignorance; he claimed that, until his case imploded with the Dec. 2006 Meehan hearing, neither he nor anyone from his office asked Mangum anything about the case. And neither he nor his office appear to have challenged the ever-changing testimony of former SANE-in-training Tara Levicy.

If Vance and Nifong differed, some elements of the political and intellectual community evident in Durham carried over into New York.

Sunday's New York Times reported that "Bill Perkins, a state senator from Harlem, who like Mr. Vance, is a Democrat, stood alongside black and female leaders and urged Mr. Vance to press forward with the case . . . Mr. Perkins and others framed the case as a possible instance of a powerful white man getting off for something he did to a poor immigrant woman. . . . Councilwoman [Letitia] James said that if the case was dismissed over credibility issues,'it would have a chilling effect on all rape victims, and it would send a message to all rape victims that unless you are a perfect rape victim, you should not even bother to come forward.'"

There’s little reason to believe that James or Perkins will suffer any political repercussions for their indifference to due process; but if they do, they could discuss survival strategies with one of the most vociferous apologists for the DPD’s procedural shenanigans, City Councilor Diane Catotti, who remains in office, and seems likely to win re-election this fall.

Alas, the Durham Democrats have removed from their website the 2006 photograph of a beaming Catotti standing by her endorsed candidate for her city’s minister of justice, Mike Nifong. But even without the photo, based on her record in the lacrosse case, those who presume guilt in sexual assault cases and are indifferent to procedural misconduct by authorities have no better friend than Catotti.

Once again, the North shows the South how it's done. The arc of history bends toward repetition.

One of the most interesting parts of Vance's motion to dismiss involved the testimony of the medical experts. In essence, they said that the medical evidence such as genital redness could have been caused by sexual assault, but it could also have had different causes. It was, in the most technical of senses, consistent with sexual assault, but also consistent with other potential causes. In other words, consistency is an irrelevant criterion and admitted to be so by Vance.

Levicy's defense will be that she used the word "consistent" in a technically correct way. Yet she used it in a misleading way by not pointing out that the signs noted were consistent with many other causes.

In New York, SANEs seem to recognize a duty not to mislead. In North Carolina, the courts seem to impose no such duty. Nor does Duke Medical appear to train its SANES to assume such a duty.

Ms. Diane Catotti presents herself as having earned a masters degree in public health which allows her to be an unemployed professional in Global Health Policy in Durham, North Carolina.

I suspect Ms. Catotti Global Health Policy work involves a close working relationship with Mike Nifong's wife along with several senior members of the Duke Office of Student Affairs to include the Women's Center and the African and African America Black 'studies' faculty.

She, like so many public health - Global Health Policy - workers, is no doubt, part of the 'Angry' in the angry studies departments at Duke.

Hopefully several attorneys will take the time to determine what Ms. Catotti knew about the hoax and when she knew it.
::
GP

North Carolina has an excellent discovery law. Some of the worst cases I have seen involving the misuse of DNA evidence, especially with respect to discovery, can be found in Michigan. Does that mean that we should conclude that the South is showing the North how it is done?

I can assure you that if DSK were NOT a very wealthy internationally known politician he would still be languishing in lock-up. In this event there clearly was evidence that "something" happened, just probably not quite the way the accuser said.

If it is your desire to replay the Civil War then put forth evidence of all rape accusations North v. South that are dismissed post charging.

I would further assert that minus the uber-liberal cat-calls of the the gender & race crowd at Duke and the political yearning of the miscreant DA the Duke case would have been properly resolved much, much sooner.

Is Vance a Communist?

As always KC, gotta bring in the $45K a year Staff Nurse who was in charge of nothing, in with the Big Boys who acutally did the deed.

A thousand cheers for Vance. I am still surprised by the number of people (including the accuser and her lawyer who should be able to explain this to her) who do not seem to understand why the charges had to be dismissed. As we so painfully know, another prosecutor might have made a different decision to avoid this criticism and "let the jury decide." This case is a good lesson for many reasons, not the least of which is what a good idea it is to tell the truth.

I don't believe I've ever asserted that Levicy was "in charge" of anything. I have repeatedly asserted, with considerable evidence to support the conclusion, that she was a (and arguably the) key prop to Nifong sustaining his case.

Of course, the AG's report--noting that despite Levicy's repeated protestations (if constantly shifting stories) there was no objective medical evidence of any rape--speaks for itself as to her role.