Tracey Cline is the chief prosecutor for Durham County. Her job requires—among other things—a degree of intellectual facility. Chief prosecutors must write briefs, and think quickly on their feet in developing and articulating oral arguments.

Starting this spring, Cline stated that she would only communicate in writing with N&O reporter Andrew Curliss. And so e-mails flew back and forth between Cline and Curliss, as well as other N&O journalists and editors. In response to the “Twisted Truth” series, Cline demanded that the N&O make public all of these e-mails. Curliss tried to give her an out, noting that the e-mails featured her making factually erroneous statements. But Cline insisted.

Below are some excerpts from the e-mails. Everyone has typos in e-mails. But Cline repeatedly makes basic spelling mistakes—such as:

Cline also favors wild run-on sentences—the sort of writing that I often see from poorly-prepared freshmen, but would never expect from a chief prosecutor:

And I have absolutely no idea what Cline meant in this sentence:

Cline also tends to play the victim card—even as she noted in her interview with the N&O that she didn’t want to suggest she was a victim: 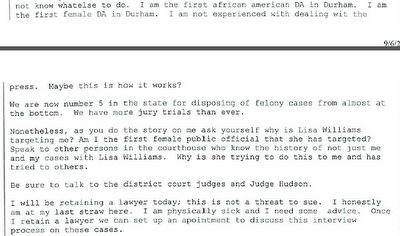 Politico recently ran a column with the blunt headline, “Is Rick Perry Dumb?” The e-mails suggest that Durham’s current DA is in Rick Perry’s intellectual league.
Posted by kcjohnson9 at 1:26 PM

Well this blog has jumped the shark.

I see you've managed to inject national politics into this matter. As someone recently said, you can't let a crisis go to waste.

You are indulging in some tremendously delusional and wishful thinking if you really believe Rick Perry is dumb. Librals thought the same thing about Reagan and he wiped the floor with them.

Ken Marks (avid reader of your blog)
Portland, OR

In the event, the post said (or implied) nothing about Perry's electability. Indeed, I could easily imagine Perry, as nominee, running a hard-right, European-populist style campaign, and winning--just as I could (and did) imagine Cline, in Durham, running a campaign that appealed to the Nifong Coalition, and winning.

It is disappointing to introduce volatile national politics into this blog (even if, say, we agree with your political view).

I believe what Cline was trying to convey, in that sentence which you said puzzled you, "The 'Twisted Truth' series, telling your side of these events, was heavily publicized and promoted by your paper prior to its actual publication. I can provide my own version of these same events, but obviously your paper will not be promoting and publicizing my version of events the way it did your version."

Rick Perry graduated with a 2.2 GPA from Texas A&M as an "animal science" major(including a D in introductory economics). I don't think his stupidity is really in doubt. (Nor is Tracey Cline's, I would say.)

Rod Stewart once pointed out that R. Perry was not running for President of Pundit-Town and that perhaps his rather blunt rhetoric should be assessed in regard to its impact on 1. Actual voters in key primaries 2. Actual voters in a general election.
Imagine that. Talking directly to voters in language they can relate to regardless of the opinion of the media-whore holding the mike in your face. Because that is the only way Perry has a prayer at winning. His stupidity becomes more obvious the longer you look at it.
Regarding that video clip from Texas. I guarantee you that Perrys remarks were understood rather clearly by the bulk of his audience regardless of the loss of coherence towards the end and the befuddlement of his questioner.
His audience got what Perry was saying even if it was in a kind of code. More evidence of his dumbness, I suppose.
An issue in the background is that virtually all problematic statistics on social welfare in Tx. are strongly driven by matters of ethnicity. When millions of your young people are undocumented, recently arrived Mexican peasants you will not see overall results that resemble Portland Oregon.
Houston and Austin are crammed with Asians and Russians and they doing rather well. A shockingly high percentage of the best performing High Schools in the US are in Texas. The largest research medical center in the world is in Houston. Samsung is putting 1 billion dollars into Austin for one facility.
Imagine where Rick Perry would be if he possessed intelligence and ideas of governing had any merit.
BTW, there is no documented evidence that B. Obama made better grades in school than Perry.
Just sayin...

For those of you who could not know this, becoming a yell leader at Texas A&M in those days was a non-trivial display of political skills. In that peculiar context. Yell Leader was the hardest rank to acquire and the single best thing to have on ones transcript.
In those days any Aggie not needing grades for Med School would have cheerfully given up two whole grade levels to be a Yell Leader. In that world, it was a far more valuable bit of credentialing.

I've been reading your blog since the LAX case began. I've learned quite a bit. I thought you were a liberal, but the blog has never been "political", I think you've done a great job of presenting the facts, then commenting on them. (Especially the updating of Duke and the faculty- won't be sending any of my 4 kids there).

I think this post and the one below it are beneath you. The liberal media always tries to portray the Republican candidates as dumb (Bush 43, Reagan-amiable dunce), crazy (Bachmann/Goldwater), weird (Romney). But if you're really going to go "political" and tie Cline into present day politicians then why not tie her to the genius in the White House. The guy who pronounces "corpsman" Corpse-man, who thinks there are 57 states, and who said on Memorial Day, "On this Memorial Day, as our nation honors its unbroken line of fallen heroes — and I see many of them in the audience here today —". I know Perry got C's and D's in college, but I don't know what Obama got b/c he's never released any of his grades. I am a conservative, but I'm not a Perry supporter, I don't know enough about him. (I admit, I won't be reading the Politico for info).

Anyway, I think it's a stretch to try to compare Rick Perry to Tracy Cline. It belittles the rest of your interesting coverage of Cline's disastrous email exchange with the N&O.