As seen in the document below, Tracey Cline is continuing her crusade against Judge Orlando Hudson.
In this instance, the former DA has requested mediation to address her demands for full access to "the email of [Hudson's] assistant, Peggy Bullock and himself." [comma splice in original] A Cline FOIA request for some Hudson e-mails had been granted, but (as would seem appropriate) Hudson did not turn over e-mails relating to specifics of pending criminal cases. This, at least, is the version Cline presents of her previous FOIA requests; as her removal proceedings demonstrated, she has only the loosest of attachments with the truth.
In a request that consisted of three paragraphs written by her, the former district attorney managed to include four grammatical errors (such as, "Last week I e-mail Judge Hudson...").
It's hard for me to imagine that a private citizen, as Cline now is, could obtain full access to the e-mail files of a sitting judge (and his assistant). 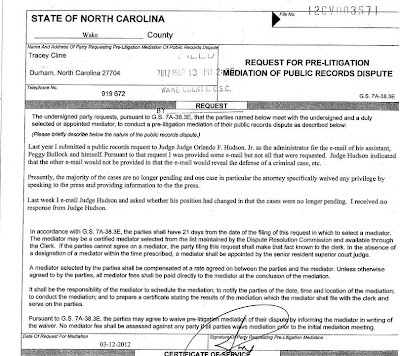 Sidney Harr's lawsuit against Duke has been dismissed with prejudice. The order describes conduct by Sidney which is very similar to Tracey Cline's conduct which got her removed from office.

It is a sad commentary on Ms. Cline's legal expertise, or lack thereof, that she practices law at the level of someone like Mr. Harr.

Instead of pursuing Judge Hudson's emails, Tracey Cline's time might be better spent acquiring and reading any of the numerous grammar books available. She might find that her filings would garner traction if they demonstrated a concern for the niceties of grammar.

"Is Harr a Communist?"

No, he is a deluded megalomaniac, which is worse.

I can't help but feel sorry for Cline. As some one who made it through a BA in college with a son in elimentery school who spelled better, I understand the basic problem.

I used the resource at hand (a 4 grader when I graduated) She should do the same for her spelling (My son is even beter today)and I am sure that there are good mental health resources to help with the central problem as well.
Freonsniffer 2

Well, gag me.....Durham's proudest homophobic right wing Christian bigot, the one and only Victoria "gays are disease ridden" Peterson, formed a group of citizens ( 3 or 4 whackos) to protest the removal of Cline. So says the Herald Sun. gosh, it sures must make Durhamites proud to know Peterson is one of theirs!