"We have spoken with Alec and he would like to apologize to Duke and the men’s lacrosse team for his inappropriate tweet. It was in poor taste and should not have been made. He removed it shortly after it was posted.

I am grateful to Mr. Best for his reply.]

The on-campus crusade against the 2006 Duke lacrosse team was something of a perfect storm. The critical element was the race/class/gender-obsessed faculty that made up the bulk of the Group of 88. A president unable or unwilling to confront the faculty mob was a necessary ingredient. But the anti-lacrosse contingent also included professors who sought to exploit the affair as part of a longstanding campaign to downgrade the role of athletics at Duke. Figures such as anti-lacrosse fanatic Orin Starn and Peter Wood, whose CCI recommendations for Duke sports were far too extreme even for the Brodhead administration, typified this faction.

Not all universities, then or now, have presidents as cowardly as Richard Brodhead. Unlike Duke, most other universities would have had at least a few voices willing to speak up against the mob from the start. And, perhaps, “activist” faculty at some other universities might have been savvy enough to once reference the presumption of innocence in their public statements, even if they didn’t really mean it. Otherwise, however, I suspect that if the Duke lacrosse case had occurred at Harvard or Cornell or Georgetown or UNC, we would have seen a similar faculty reaction—race/class/gender professors combining with anti-athletics faculty members to exploit the crisis for their own campus agendas.

Perhaps this recognition that their own school’s faculty mob just as easily could have turned against them prompted a degree of empathy from college athletes and coaches at other schools. Stray comments like this one from Dom Starsia stood out from the crowd in this respect. 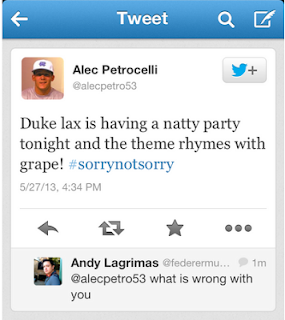 Given that his e-mail makes sense only if he believed a rape occurred in 2006, Petrocelli is, to put it mildly, classless; he subsequently deleted his Twitter account. But the statement provides only the latest reminder that there will always be a segment of society that believes the version of events offered by Mike Nifong and the Durham Police Department, regardless of evidence.

As things stand now, the DPD will likely never be held accountable. The 4th Circuit decision, which largely neutered the lawsuit against Durham, has been appealed to the Supreme Court. (The cert petition filing notice is here.) From a practical standpoint, it’s hard to imagine four justices granting cert: Justices Ginsburg and Sotomayor would seem to sympathize with Judge Gregory’s race-based perspective of U.S. law, and Justices Roberts and Alito tend to adopt reflexively pro-government positions on criminal justices issues. Assuming (a big assumption) that Justices Scalia and Thomas would vote to grant cert, the falsely accused players would then need the votes of Justices Kennedy and one Democratic appointee just to get the case before the Court.

Then again, they could just call it a tax and be done with it! You never know with the SCOTUS.

You picked out one tweet. There were dozens of others. It was really disappointing that, after all these years, those morons are still out there. But I guess that's why you're still blogging.

Agreed, on both counts.

I don't think that he was 'classless' for referring to an incident that Duke never admitted didn't occur; a little uninformed, maybe. Besides, why use a harsh term to discribe an action that indicates a student's free expression when we have the president of Swarthmore college recently accepting students' on-campus 'classless' behavior as being perfectly acceptable.
Big Al

The tweet was just a minor attempt at humor of the kind commonly made by college students; thoughtless, but that's more or less what "sophomore" means.
(not to be taken too seriously...)


(btw, what happened when a lacrosse player sent a joke email which spoofed American Psycho? That was dismissed
as just a typical college spoof, wasn't it?

You couldn't imagine that a judge on a federal appeals bench would still be referring to it as though it had not been a spoof and somehow said something about the nature of the lacrosse plaintiffs, could you?)

Well, the email was a private conversation to vent the frustration resulting from an encounter with a poisonous soul. The tweet was a insulting comment intended to be read by a broad public audience.

In the case of the tweet, I judge it to be merely an indiscretion but one that reveals a good bit about the player's limited world view. He might otherwise be a fine young man.

And speaking of administrators who presume guilt:

"Mr. Van de Velde’s long legal battle to clear his name has taken many turns, and now has reached something of a conclusion. On Monday, he, Yale and the City of New Haven said they had reached a settlement over his lawsuit, which claimed that Yale and New Haven wrongly singled him out, and that his reputation and health had been damaged." http://www.nytimes.com/2013/06/05/nyregion/james-van-de-velde-from-pariah-back-to-pillar.html?_r=0

"In 2003, Brodhead was named a defendant along with, Richard Levin, Linda Lorimer in a lawsuit by Yale professor James Van de Velde claiming damage of reputation after Van de Velde was accused of murdering Suzanne Jovin, a female student, and Brodhead subsequently canceled his class citing his presence as a "major distraction.'" (Wikipedia)

I'm sure that the tweet was a sophomoric attempt at humor. On the issue of taking it seriously, I referenced it only for what it says: that the "humor" makes no sense unless the author of the tweet believed that a rape occurred. In this respect, the tweet serves as a reminder of the continuing damages of the allegations against the falsely accused players. (I don't see a comparison to the McFadyen email in this regard.) That such a tweet came from a fellow athlete makes it more difficult to understand.

While I have been very critical of the current Swarthmore administration (http://www.mindingthecampus.com/originals/2013/04/swarthmore_occidental_and_thei.html), events on that campus don't seem to have much to do, one way or the other, with Mr. Petrocelli.