Hobgood’s findings of fact consisted primarily of two types of material: (a) a recitation of the facts of the Cline-Hudson dispute accepting as true Cline’s version of events (and her recollections of various conversations with Judge Orlando Hudson); and (b) a list of Cline’s 21 most outrageous statements, culled from her various court filings against Hudson.

The 21 statements, Hobgood noted, “are not supported by the facts and have brought the office of the Durham County District Attorney into disrepute.” And Cline’s written assertion that Judge Hudson was “corrupt” was “not only false,” but was “inexcusable” and indicative of “actual malice” in the performance of her duties.

In his conclusions of law, however, Hobgood divided these 21 statements into two types. Sixteen of the twenty-one, he wrote, “may well fall under the umbrella of protected speech under the First Amendment.” [emphasis added] In a damning conclusion for the fate of Cline’s law license, Hobgood added that these 16 statements “unquestionably” violated the State Bar’s Rules of Professional Conduct, and were also “abusive and repetitive.”

But, nonetheless, as in his factual findings regarding closed-door details of exchanges between Cline and Hudson, Judge Hobgood was willing to give Cline (or in this case, her attorneys) the benefit of the doubt. He therefore did not dismiss out of hand the Cline team’s arguments that her “caustic” statements should be viewed through the prism of her First Amendment rights.

Hobgood found, not unreasonably, that these statements constituted a “false, malicious, direct attack” on Hudson, to which Hudson (because of the Code of Judicial Conduct) could not respond. The statements, moreover, were “not supported by any facts in the records or which can be reasonably inferred from the record.” Hobgood noted that the Supreme Court decisions cited by Cline’s attorneys regarding the First Amendment protections for public officials explicitly carved out an exception: that, as Garrison v. Louisiana held, the “knowingly false statement made with reckless disregard of the truth, do[es] not enjoy constitutional protection.” Cline’s First Amendment argument had come up short, and as a result she is out of a job.

Two additional, though implicit, items from Judge Hobgood’s order. First, he appears to have given no serious weight to the argument of Nifong apologist Marcia Morey, who maintained that Cline’s behavior was a mere “distraction to the administration of justice.” Given that Judge Morey had previously claimed that she considered Nifong truthful, she has no credibility on matters of ethics, and Hobgood’s decision not to honor her opinion was appropriate.

Second, Hobgood did include one paragraph that appeared to respond to testimony offered by Durham attorney Bill Cotter (who I know and like) on behalf of Cline. Cotter presented perhaps the most effective defense of Cline offered at the hearing. He didn’t try to defend the truth of Cline’s stories (as Cline’s attorneys did), or even the bizarre nature of her behavior. Instead, he suggested that the Cline-Hudson dispute should be characterized as a personal squabble, rather than something that rises to the level of professional misconduct.

But, as paragraph 42 of the Hobgood order noted, Cline did not confine her squabble to Hudson. 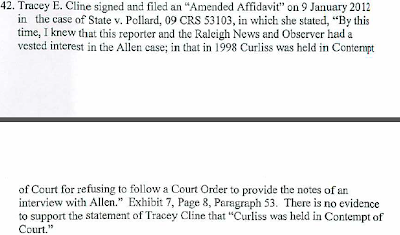 In short, a district attorney, acting in her official capacity through an affidavit filed under her signature, accused a member of the public with having been held in contempt of court—though this accusation was a lie. There was no possible First Amendment protection for this assertion. Nor could it be excused as part of a personal squabble between Cline and Judge Hudson. Instead, the false statement appeared to be part of a pattern of Cline lashing out—the facts be damned—against anyone who she perceived as frustrating her agenda.

In the end, then, neither the First Amendment nor an appeal to personal disputes of courtroom politics could save Cline.

Well at least nobody has gotten stabbed (yet)

Is Cline a Communist?

Another Durham liar bites the dust.

She shoulda been kicked out for hiding evidence. She deserved it. Just like Nifong. Also like Nifong, she didn't think rules applied to her.

The person who wrote what I would say is a very Cline-friendly pre-verdict article in the Indy is none other than our famous distiller of lies, Samiha Khana. She can be read here. (Warning: It's icky)

Is Hobgood a Communist?

Excerpt: " Cline had been Nifong's chief assistant, and she won the election to replace him in 2008. [A Democrat,] she was re-elected without opposition in 2010."

Is Sutton a Communist?

No, he is a deluded megalomaniac.

"Immediately after the hearing, Victoria Peterson, a Cline supporter, announced she wanted to talk to the media outside about the “tragedy” and said there was another side to the story.

With three other Cline supporters, Peterson said she was dismayed that one man could remove the elected district attorney from office."

Is Peterson a Communist?

So, Nifong is gone. Cline is gone. The main two police officers, Himan and Gottlieb, are gone. Linwood Wilson is gone. What about Mayor Bell and City Manager Patrick? Will it take discovery in the civil case to get rid of them?

Meehan is gone. Samiha Khanna is relegated to a backwater. Steel is embarrassed and gone. Levicy is gone.

Mangum is in jail and in prison for life soon.

A lot of liars and haters left at Duke, but then we haven't really gotten the true story from discovery about them.

I just have to wonder why Durham still seems to be devoid of honesty and integrity in its public servants. No doubt the next election will return the same caliber of characters to office. Gov. Perdue not running again is the only ray of hope I see for NC in general, but Durham is beyond hope, IMHO. The excerpts below made me chuckle.
----
Rudolf told Hudson:
“Ms. Cline seems to be suggesting [that] because she – improperly, in my view – filed a complaint with [the N.C.] Judicial Standards [Commission] and then certainly improperly made it public, that somehow means you have to continue this case because … some public perception is adversely affected,”…

That’s “like a person who murdered his parents standing up and filing a motion because he’s an orphan,” Rudolf added. “Ms. Cline put herself in this situation.”

I have read many comments about who should have handled the Cline case, and I do find it interesting that Hudson took no action on Nifong.

One opinion:
"The (State) Bar is better equipped to evaluate her conduct, to look at all the transcripts, look at all the evidence and evaluate if she has crossed the lines,” Durham attorney Scott Holmes said.

Flashback:
“A complaint was filed against former Durham County District Attorney Mike Nifong for his handling of false rape allegations against three Duke University lacrosse players in 2006, but Hudson took no action on it, choosing to wait for the State Bar to discipline Nifong.”